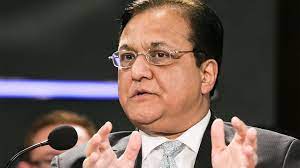 The case is being probed by the Enforcement Directorate (ED).

The Bench of Justice Sudhir Kumar Jain on Friday granted bail to him.