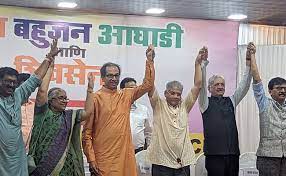 Uddhav Thackeray was in talks for over two months with Prakash Ambedkar, the grandson of Bhim Rao Ambedkar, who drafted India’s Constitution.

Announcing the alliance, Mr Thackeray said, “Today is 23rd January, the birth anniversary of Balasaheb Thackeray. I am satisfied and happy that several people of Maharashtra wanted us to come together. Prakash Ambedkar and I am here today to form an alliance.”