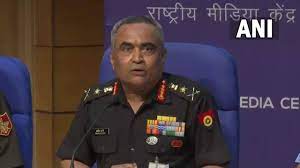 Indian Army chief General Manoj Pande on Friday confirmed that the schedule of the recruitment process under the ‘Agnipath’ scheme will be announced soon.

He also called upon the youth of the country to avail this opportunity to join the Indian Army.

During a media briefing, General Pande said announced that the decision of the Government has been received to grant a “one-time waiver”, increasing the upper age limit of recruitment to 23 years, for the recruitment cycle of 2022.