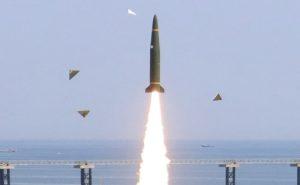 North Korea launched at least one ballistic missile into waters off its east coast on Sunday, South Korea’s military said, after Seoul and Washington staged their first joint drills involving a US aircraft carrier in more than four years.

Pyongyang has doubled down on upgrading its weapons programme this year despite facing crippling economic sanctions.