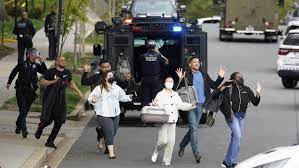 Multiple people were shot dead in Northeast Washington, not far from Capitol Hill on Monday night.

The shooting was reported at about 8:30 pm in the 1500 block of F Street North East, The Washington Post reported citing Vito Maggiolo, a spokesman for the D.C. fire department.

According to a tweet from the Metropolitan Police Department, there was a report of multiple victims but the police didn’t reveal the numbers. None of the victims have been identified and no suspect information has been released at this time.