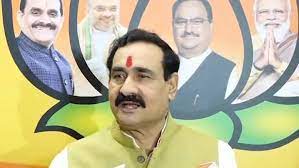 Madhya Pradesh Home Minister Narottam Mishra today refused to call the assassinations of two former Prime Ministers Indira Gandhi and her son Rajiv Gandhi as sacrifices made for the nation.

Mishra was reacting to Congress President’s “dog” remark, wherein Mallikarjun Kharge on Monday in Rajasthan and again on Tuesday in parliament said that while Congress leaders had sacrificed their lives for the country “did BJP leaders do the same”.

The Madhya Pradesh Minister and BJP leader said: “It should be condemned. If he (Kharge) considers the sacrifice of Indira Gandhi and Rajiv Gandhi as a sacrifice for the nation then he should have a look at West Bengal, Kerala, and Tripura where hundreds of BJP and RSS workers sacrifice their lives for the unity of the nation.”