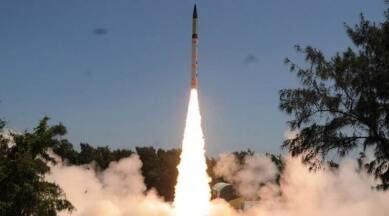 India, on Monday, carried out a successful training launch of Intermediate-Range Ballistic Missile, Agni-4. The test was carried out at 7.30 pm from the APJ Abdul Kalam Island, Odisha, the Defence Research and Development Organization (DRDO) said. “The launch validated all operational parameters as also the reliability of the system,” the Ministry of Defence said.

According to open-source information, the Agni IV has a striking range of 4000 km. A derivative of the Agni-II medium-range ballistic missile (MRBM), Agni IV is a two-stage, solid-fuel missile. The first flight of Agni-IV took place in December 2010. The second test was carried out in November 2011. The nuclear-capable missile reportedly has an accuracy of fewer than 100 meters at a range of 4000 km. The accuracy of the system and the ability to carry a nuclear warhead of up to 1000 kg makes it one of the most lethal missiles in India’s arsenal.