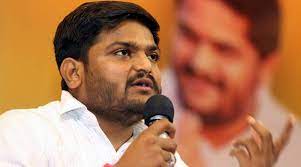 Days after Hardik Patel quit the Congress, Gujarat party chief Jagdish Thakor has claimed that the he took the step as he was afraid that he might have to go to jail in sedition cases filed against him.

Gujarat Patidar leader Hardik Patel on Wednesday resigned from Congress saying that he resigned after he felt that he was being “ignored”.

Mr Thakor, speaking to media said, “The party has given him everything. The party had made him a “star campaigner” in the recently-held Assembly polls to five states and had given him a helicopter as well. The party gave a very high post to him and yet he said that the party has not given anything then I think it’s not true.”