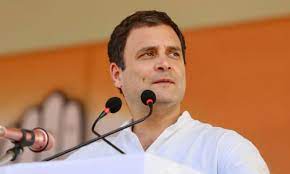 Hitting at the BJP government in the state, Congress leader Rahul Gandhi on Monday said that Gujarat has become the centre of drugs.

“Gujarat has become the centre of drugs. All drugs are moved from Mundra port but your government doesn’t take any action. This is the Gujarat model. Gujarat is one state where you have to take permission before protesting; permission from those against whom protest will be done,” said Rahul Gandhi.

He further said if Congress comes to power in Gujarat, farmers’ debts up to Rs 3 lakhs will be waived off.