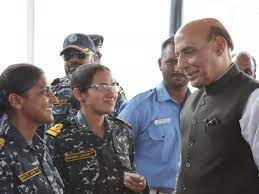 He was accompanied by Lieutenant General Ajai Singh AVSM, the commander-in-chief of Andaman and Nicobar Command (CINCAN), and interacted with the troops there.

Mr Singh’s visit and his interaction with the troops assume importance in light of the growing influence of China in the Indian Ocean region.