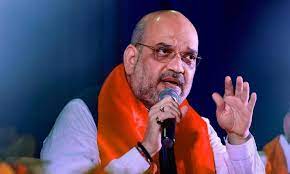 Union Home Minister Amit Shah on Tuesday exuded confidence that the ruling BJP will once again form a government in Gujarat, his home turf, with a two-thirds majority.

Targeting opposition, Shah said that the people will not get carried away by the false promises but will base their judgement on the development works of the BJP.

Addressing a function held in Gandhinagar on the occasion of the first anniversary of Chief Minister Bhupendra Patel in office, he hailed the leadership of Patel and said that the state has seen progress during the BJP rule.

In an apparent dig at Arvind Kejriwal-led Aam Aadmi Party (AAP), Shah said that the people who “sell dreams” will never win in Gujarat, where Assembly polls are due in December this year.