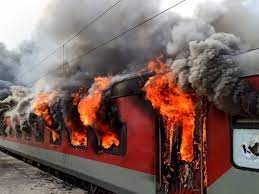 Protests against the Center’s ‘Agnipath’ recruitment scheme intensified in Bihar on Friday as angry aspirants set fire to at least 20 bogies of the New Delhi-Bhagalpur Vikramshila Express and New Delhi-Darbhanga Bihar Sampark Kranti Express at Lakhisarai and Samastipur stations and blocked highways in the state.

The demonstrators blocked highways at several places in Buxar, Bhagalpur and Samastipur and burnt tyres as a mark of protest, officials said.

The protests, which is into its third day in the state, caused massive disruption of railway services at Buxar and Kahalgaon, officials of East Central Railways said.