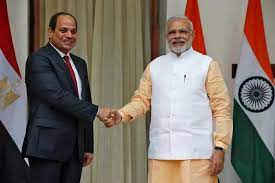 Egyptian President Abdel Fattah el-Sisi will be the first chief guest from his country at India’s Republic Day celebrations, next week, the government announced on Friday. This makes him only the fifth leader from the West Asian and Arab world to be the chief guest.

According to sources, President el-Sisi is set to arrive in New Delhi on January 24th and will be greeted by Minister of State for External Affairs, Rajkumar Ranjan Singh. The following day, he will hold bilateral talks with Prime Minister Narendra Modi, as well as meet with Vice President Jagdeep Dhankhar and attend a banquet hosted by President Droupadi Murmu. On January 26th, he will serve as the chief guest at the Republic Day parade.

In addition to President el-Sisi’s visit, a 180-member strong contingent from Egypt will participate in the parade and a series of agreements are expected to be signed between the two countries, sources said. Additionally, a commemorative stamp marking 75 years of diplomatic ties between India and Egypt will be released.